This is the storyline: a deadly virus is on the loose and it is threatening to erase the humanity as we know it from the face of the earth.

The virus can destroy the lives of millions, even billions, of people, and the rest (who were lucky enough to have immunity) are going to try to survive in the world that will never be the same.
The fate of the world is hanging in the balance… Who – the good guys or the bad guys – are going to prevail?

The epicentre of the deadly virus is swarmed with zombies who were once people, but then the fast-spreading disease got to them.
There are many of them – running around and thrashing, biting, raging and chasing after people. However, the infected and fast-moving zombies are not necessarily your worst enemy…

A huge labyrinth filled with special sound and lighting effects, dynamic music and tons of action.

The game is appropriate for both – adults and kids, who love sports, action games or competitions.
You can choose different game scenarios based on the age of the players.

Children under 12 years of age can participate in an easier version without the actors (zombies), and older children can try and tackle the raging undead.

In the game, two teams compete against each other. Both – team and individual results are systemized with the means of special application software.
The results of an ongoing game are displayed on a special screen, so people who choose not to participate can observe the progress of their friends.

The emotions and dynamics of the game are similar to those characteristic to laser tags. The difference is in the games’ scenario, which draws you in and feels like a real action movie.
How is it going to end? It’s up to your game plan and team’s decisions.

Virus – the one and only smart action game played in the real.
10-30 players over 9 years of age can play in one session.

Celebrating a birthday? You can book the hall for 1 hour after the game ends (price – 20 eur). 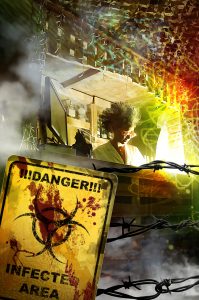